The Discipline of Getting Things Done

By Larry Bossidy and Ram Charan

· Now updated with a completely new introduction: "Resetting Execution in a Time of Crisis."

The book that broke important new ground when first published ... now made more relevant than ever through a timely introduction tied into the current financial and economic crisis.

1. Substantial New Introduction: Shows how the business environment is being "reset," will never return to" normal" and why the discipline of execution is more important than ever.

2. The Realism and Hard-Nosed Approach that Readers Expect From Bossidy and Charan: Practical advice from two authors rooted in the real world about how to get things done.

3. Authors Who Have Grown in Stature, Visibility and Importance Since Publication in 2002. Larry Bossidy is a regular on CNBC's Squawk Box. Ram

Charan has been the subject of major profiles in Fortune, The Economist and Fast Company and is regarded as "the Peter Drucker of the 21st century."

4. Highly Relevant Stories Included in New Introduction: How Jamie Dimon, CEO and Chairman of JPMorgan Chase has used the principles of execution to great success throughout his career, contrasted with the failure of former Citigroup CEO Charles Prince.

Larry Bossidy is the retired chairman and CEO of Honeywell International. Earlier in his career he was vice chairman of General Electric. Ram Charan is a highly sought after advisors to CEOs and senior executives in companies around the world. 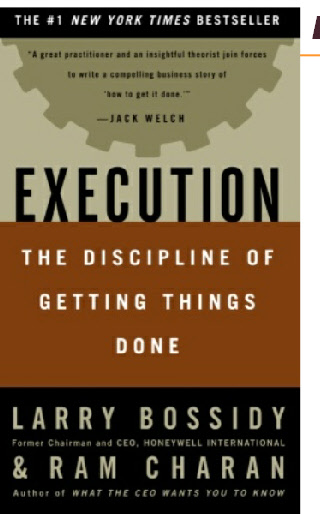