Ron Carlson’s stunning novel, THE SIGNAL, has been named a Best Book of 2009 by both the Washington Post and the Los Angeles Times!

THE SIGNAL, by Ron Carlson (Viking, $25.95). This well-toned novel, which covers six days of camping in the Wind River Range of Wyoming, accelerates like an avalanche, suspicion rolling into fear and then roaring down with a conclusion that shakes the ground. – Washington Post

An award-winning and beloved author returns with a stunning tale of love and peril in the woods. Mack and Vonnie once were husband and wife, and every year for the last nine years they have hiked into the staggering and beautiful Wyoming mountains. Who they are, how they met and fell in love, and how, now, in their tenth year, they have separated and Mack has served a prison term, is a story that will emerge masterfully during their last, five-day climb. Mack is a charismatic ex-cowboy who watched his father’s ranch erode year by year, leading Mack first into penury and then, gradually and as if by cosmic design, into a life of crime. Vonnie is the fiercely intelligent and head-strong girl who came West for love only to have that love stolen from her, bit by bit.  Now Mack and Vonnie navigate the challenging trail they know so well; they camp, they fish, and they incrementally reveal the true nature of their wounds to each other. Each night Mack hears the beat of Vonnie’s heart and knows that signal is still there for him. But Mack is also receiving another signal, on a military-issue Blackberry, laying out the coordinates for something that has fallen from the sky. It is a beacon that will lead Mack and Vonnie into terrible jeopardy, into conflict with forces darker than the two of them can imagine, and it is a signal that will jeopardize everything they have come to love and trust.  Ron Carlson’s stories and most recent novel, FIVE SKIES, have connected with readers in profound and often deeply emotional ways. His new, masterfully evoked novel is in every way only more involving, more human, more thrilling, and more devastating.  AGENT:  UK, TRANSLATION, 1ST SERIAL, AUDIO.

 “With THE SIGNAL, a gripping thriller and gorgeously rendered portrait of Wyoming rolled into one, Ron Carlson establishes himself as the Annie Proulx of the high-stakes caper….[He] is probably the best American writer you’ve never heard of.” – The Daily Beast

 “Ron Carlson…writes like Hemingway without the misogyny and self-parody. If there's a smart man in your life who might still be tempted into the pleasures of contemporary literary fiction, THE SIGNAL could be just the gateway drug you're after.” –Washington Post

 “Carlson's slim but powerful novel is a bittersweet love story and a rousing adventure …Carlson evokes the rugged solace of nature with grace and simplicity, his unadorned prose reminiscent of Cormac McCarthy's.” –Miami Herald

  “Ron Carlson's new novel is a love story and a wilderness adventure that mounts to a climax of shocking, and satisfying, violence… His precise low-key prose is perfectly tuned to modulations in light, weather and landscape.”—LA Times

 “Simple, taut, and elegant, it's a beautifully told tale of love and redemption that all readers will appreciate.”—Library Journal

 “A taut and suspenseful novel written with beauty and precision… Carlson’s dialogue and description is crisp and witty, and it feels as though his years as a short story expert have allowed him to condense into less than 200 pages a story it might take another writer 400 pages to tell...A potent page-turner.”—New West

 “Carlson's writing is crisp and blunt, much like the very Wyoming landscape he describes…THE SIGNAL is about small, tight things that widen out into immensities." –Chicago Tribune

 “A beautifully written and suspenseful tale of love and peril by an award-winning writer…Ron Carlson’s love for the mountains and his mastery of fiction radiate in the pages of this thrilling, fast-paced love story.”—Funblast.wordpress.com

 “Carlson has the ability to zoom in and zoom out of telling details. His sentences stretch effortlessly ….Thriller? Literature? Definitely the latter. And entertaining stuff either way.”          —Markhstevens.wordpress.com 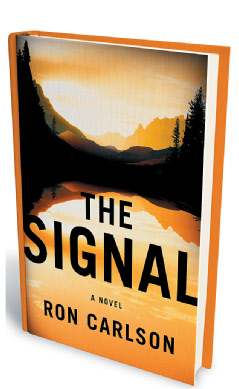